Refer a Patient Request an Appointment 800 USC-CARE Donate myUSCchart
Home / Blog / Eye Care / What Eye Contact Can Tell Us About Political Candidates (and Others!)
Eye Care

What Eye Contact Can Tell Us About Political Candidates (and Others!) 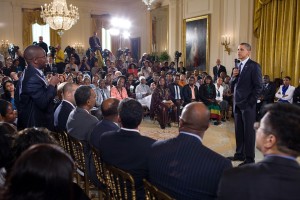 The 2016 presidential election campaigns are well underway as the latest candidates competing for the White House make daily appearances in the media, holding rallies and participating in debates. From the very first televised debate in 1960, it is clear that a candidate’s composure in front of the camera and interaction with their opponents are incredibly important for his or her elect-ability.

However, while most of today’s candidates are well-practiced and polished before stepping foot on stage, there’s an important component to pay attention to that is muc more difficult to control – the eyes.

Eye contact is a powerful form of non-verbal communication that can convey everything from our emotional state and intentions, as well as our power and dominance. So, what can eye contact tell us about the men and women running for office?

The politics of the eyes

Researchers have uncovered the many meanings behind a simple glance, a wink, or an extended stare. Numerous studies have noted that non-verbal communication and visual attention can reveal more than a person’s feelings, but also personal information. In fact, eye contact, or lack thereof, is often cited as one of the first indications that a child has autism. So, when watching the 2016 candidates or dealing with others in everyday life, keep these eye cues in mind.

We also know from research that high status individuals feel free to stare more at others, to look less as they listen, and to command a larger visual space.

Forced Eye Contact – It is commonly believed that forcing another person to hold eye contact beyond a comfortable length of time is one way to assert dominance, however, it can also be the quickest way to lose influence over another person. Not only is forced eye contact intimidating, but it tends to put others on defense, making it all the more likely that they will shut out any argument you are trying to make.

So, if a candidate is trying to lock eye contact with an opponent, it may be an indication that he or she is trying to force the other to submit to his or her idea.

Avoiding Eye Contact – Averting one’s gaze during a conversation can have one of two meanings: either the individual is insecure or submissive to a more aggressive, dominant personality, or second, the individual feels that the other person is inferior. Eye contact is a great indicator for how confident a person feels. By turning one’s eyes away, it can allow the viewer the power to watch him or her without challenge, or it can show the viewer that he or she does not value what the other is saying.

In a political debate, turning one’s eyes away can indicate that the listener does not agree with or value what the other is saying, or wants to dismiss the other person.

Rapid Blinking – When nervous or stressed, a person’s rate of blinking naturally increases, often indicating that the person is trying to think quickly. Many researchers have found the individuals begin to blink more often when trying to lie, and those who are aware of this “tell” may even try to force themselves to blink less to appear more calm.

It is not uncommon to see someone blinking rapidly during a heated argument or when confronted with uncomfortable topics.

Eye Rolling – Rolling one’s eyes is a blatant social cue that is used to consciously reject or dismiss another person. Presidential candidate Al Gore famously rolled his eyes throughout a political debate with George W. Bush in an effort to discredit his opponent. However, the excessive eye rolling, in combination with audible sighs, became so exaggerated that the audience was more uncomfortable than convinced by Gore’s efforts.

Needless to say, the eyes convey a wide range of social cues and information. However, the way we move our eyes can also indicate facts about our internal health. For example, jerky, uncontrolled eye movements can help identify whether a person has Parkinson’s Disease or other neurodegenerative issues, while holding longer visual fixations while processing information may indicate Alzheimer’s.

To make an appointment at the USC Roski Eye Institute, please call (323) 442-6335 or contact us to schedule a consultation today.

Can Monkeypox Affect Your Eyes? Answers from an Eye Specialist

Ask the Expert: How COVID-19 Affects the Eyes

When Blindness Attacks: How Research and Cutting-Edge Clinical Techniques Saved...

Vanessa Ho was just beginning her Saturday morning when she suddenly felt intense pain and blurry vision in her right...
Read more

The Corneal Correction: How a Specialty Scleral Lens Restored a...

Three years ago, an outside clinic diagnosed Maria Contreras with keratoconus, a degenerative eye disease that causes thinning and bulging...
Read more

It’s Workplace Eye Wellness Month, What Serious Dangers are at...

Whether you’re a full-time employee or a freelancer working from the comfort of home, it’s important to be aware of...
Read more

The Ability to Blink: How Oculoplastics Saved a Burn Victim’s...

When Joe Cruz had a car accident in Northern California, burn marks left his face so devastated that he lost...
Read more
navigate_before Previous navigate_next Next
calendar_todayRequest an Appointment phoneCall Us: (800) USC-CARE searchFind a Provider placeFind a Location